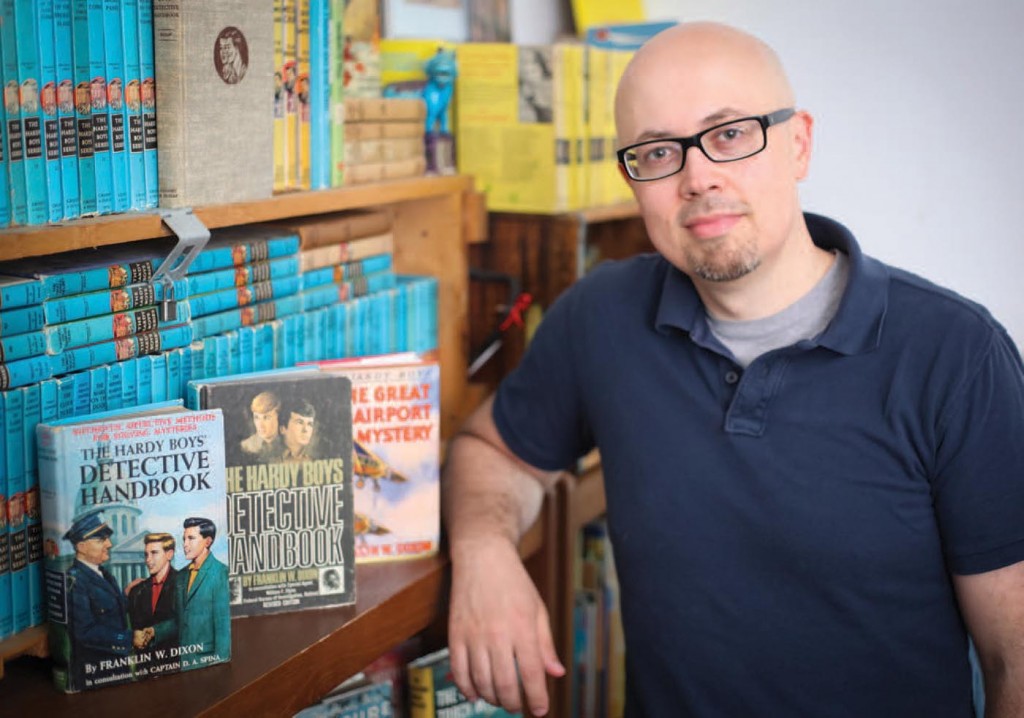 It doesn’t take a detective to figure out that Longwood English professor Chris McGee loves the Hardy Boys.

In his office, he has an entire 58-volume set of the revised editions — the series that he and most fans grew up reading — as well as about 10 of the rare original books, 15 reprints of the original series and 75 paperbacks.

What’s a little more surprising is that McGee’s passion for the fictional teen-age sleuths Frank and Joe Hardy has found its way into his scholarly endeavors. The long-running mystery series for young readers has been the subject of papers McGee has given at conferences, is a “significant” part of an academic book he’s writing on mystery fiction for chil- dren and is being taught in one of his courses this fall.

McGee, an associate professor of English whose academic specialty is mystery fiction for children, fell in love with the Hardy Boys books as a 10-year-old, checking them out, one by one, from his local library in Hoopeston, Ill. He has read many of the books from the original series, which debuted in 1927, and all of the revised books, published beginning in 1959. Both sets were written by ghost- writers under the collective pseudonym Franklin W. Dixon and published by Grosset & Dunlap.

“The original books are much better,” said McGee. “The revised books rely on cliffhanger endings to the chapters and are faster, but there is no characterization. The originals were more natural, more sophisticated stories and were better plotted.”

The series was created by Edward Stratemeyer, who founded a book-publishing syndicate and also created, in 1930, the equally popular Nancy Drew series, as well as the Tom Swift and Bobbsey Twins series.

“In the Hardy Boys series, Stratemeyer would create titles and character names and send those off to ghostwriters who were typically paid little money — a hundred dollars perhaps — to write within a tight deadline and story expectations,” said McGee. “We know that a Canadian journalist named Leslie Mc- Farlane wrote many of the original stories.

He infused them with a degree of humor, ad- venture and surprising disrespect for authority that made them stand out. He wanted Frank and Joe to be rebellious, while Stratemeyer wanted them to be better-behaved.”

McGee has even tried his hand at bringing the characters to life and giving them a mystery to solve.

“In graduate school, I wanted to see if