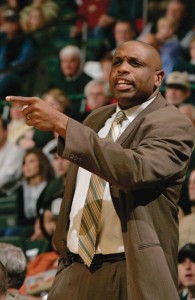 New head men’s basketball coach Jayson Gee is bringing a new energy to the Lancers — and he’s expecting the team to follow his lead. Gee wants Lancer Nation to be prepared for PACE: pressure, attack, compete and energize. “We want to get out in transition and score early,” he said. “The most difficult way to score is against a set defense. We want to take the first available good shot.”

Don’t expect the new-look Lancers to focus only on putting points on the board: In his seven years as an assistant coach at Cleveland State, Gee helped lead a squad that was known for its stingy defense. He’ll bring that same focus to Longwood. “My focus right now is defense,” he said. “I want to get [opposing] teams to shoot 44 percent or below. That is a goal we have to get to the first year.” Last season, Longwood’s opponents shot about 48 percent from the field. He has a firm foundation in shooting guard Tristan Carey — who averaged a team-high 15.6 points per game — and point guard Lucas Woodhouse, who led the team with 180 assists.

Gee, who played basketball at the University of Charleston, began his coaching career at Cleveland State as an assistant to coach Gary Waters. He taught me the value of defense,” said Gee. “Get guys who will compete and play hard. “We are going to be a defensive-minded and pressure team. We are going to be in your face and aggressive.” 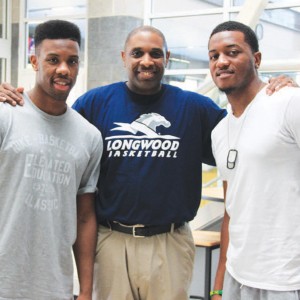 NBA point guard Norris Cole (left), who has spent two seasons with the back-to-back NBA champion Miami Heat, and development league player D’Aundray Brown (right) stopped by the Longwood campus in July to visit first-year men’s basketball head coach Jayson Gee, who coached both players at Cleveland State. ‘I think our players see it can be done,’ said Gee, in reference to the visit. ‘They don’t have to be that guy like LeBron James, who’s highly publicized.Through hard work, togetherness, submission and all those things that are our core values, you can make a successful transition to the next level.’

The X’s and O’s of coaching were hard-fought lessons, but serendipity spurred Gee’s initial interest in coaching. On a college break, he stopped by his high-school alma mater to catch up with his former coach, Wayne Wiseman, who was at basketball practice. Wiseman asked Gee if he’d like to put the players through a drill, which led to Gee sitting on the bench for the next game. “That high that I felt was euphoria,” said Gee, adding that the experience drastically altered his career path. “I thought I was going to be a lawyer, but I returned to school and changed my major to education”— with coaching as his ultimate goal. The relationship with Wiseman has continued as Gee has developed into a Division I coach — Gee has called him every Father’s Day since he left high school.

“He decided what he wanted to do and what his goal was, and did everything in his power to reach that goal,” said Wiseman. “He’s just a tremendous kid. After 32 years of coaching, he is probably the closest kid I had who was like an assistant coach on the floor.” Ritchie McKay, associate head coach at the University of Virginia and a good friend of Gee’s, said Longwood fans will see a team that plays with energy. “What I remember about Jayson is he always had a smile and was a relentless worker,” said McKay, who met Gee on the recruiting trail. “It seemed like no matter where I showed up, he was there. I can’t tell you how excited I was when he said he had interest in the Longwood job.”