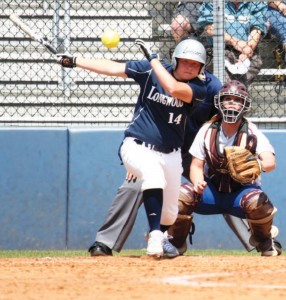 Brooke Short ’13 was a leader at the plate, on the rubber and in the clubhouse for the Big South Champion Lancers softball team. © Red Rocket Photography

Brooke Short ’13 was named the 2012-13 Big South Conference Female Student-Athlete of the Year. Short, the Big South’s third-leading hitter and second in home runs, total bases and walks, is only the second softball player to win the conference’s top honor and the first student-athlete to do  so in Longwood’s first year as a Big South member.

Short highlighted her lone season in the Big South with Third-Team All-America accolades from the National Fastpitch Coaches Association. The  southpaw was also an All-Southeast Region first team member, the Big South Player of the Year, an All-Conference First Team honoree and an All-Tournament Team honoree after helping the Lancers win the Big South softball championship.

As a pitcher, Short closed the year with an 18-8 record and a 3.07  ERA. Short concluded her Longwood career as the school’s all-time leader in at-bats, hits, RBI, runs scored, home runs, walks and games played.