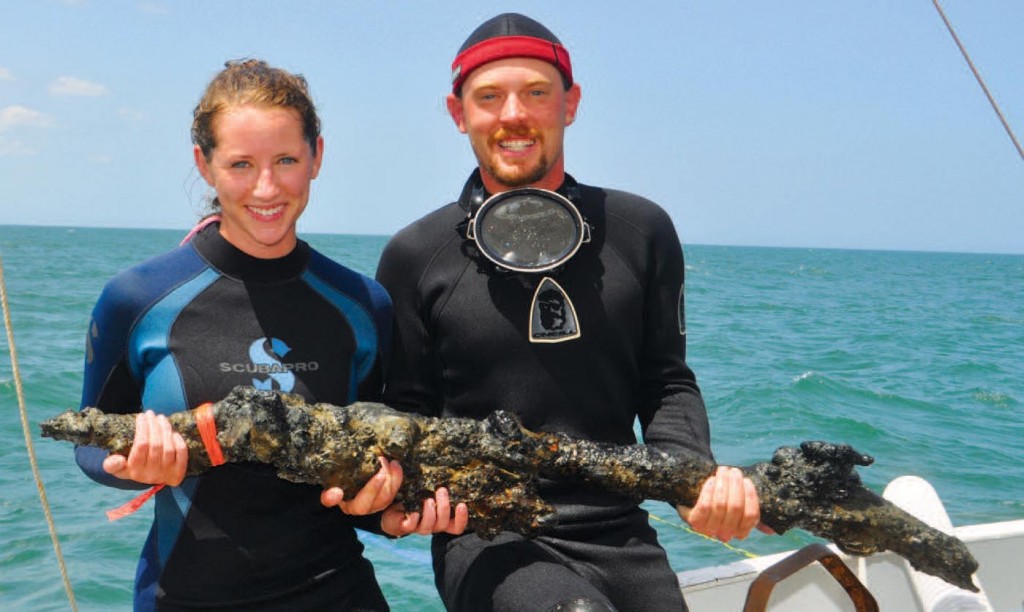 Cassie Shiflett ’13 and Brendan Burke ’03 with the 18th-century musket she brought to the surface during her internship with Lighthouse Archaeological Maritime Program, where Burke is logistics coordinator.

You could say that Cassie Shiflett’s career plans are adventurous.

Shiflett ’13 plans to be an underwater archaeologist. During summer 2013, before graduating in August, she participated in the field school of the Lighthouse Archaeological Maritime Program (LAMP) in St. Augustine, Fla., where she did an internship during the summer of 2012. These days she is working as a research diver for a company that specializes in oil spill cleanups. She plans to apply in 2014 for the graduate maritime archaeology program at Flinders University in Australia.

“I’m an adventure nut who likes to be active — sitting at a desk all day is not for me—so underwater archaeology is a perfect fit,” said Shiflett, who majored in anthropology.

Her passion has survived despite dives in which visibility was so bad she could “barely see my hands while moving them back and forth in front of my face.” She wasn’t even deterred by a dive at the LAMP field school during which she was stung on the face by a jellyfish and her hip slipped out of its socket due to heavy swells and a strong ocean cur- rent. “After all that, I figured it was time to go back up to the surface,” she said with a laugh.

She currently is diving on an as-needed  basis with a research dive team for a company called Opflex Solutions. In early summer, she went on two diving trips around Singer Island, Fla., near West Palm Beach, which has contamination problems from E. coli caused by the lack of a filtration system to handle storm water runoff. The trips were part of an effort to test a sponge, called “Synthetic Eelgrass,” which Opflex manufactures and says not only cleans up but prevents damage from oil spills and storm water runoff. She’s also going to Bermuda, where Opflex is working with the government to redo the storm-drainage system due to a problem with metal in the water, and might go to Nigeria, where there’s been an oil spill.

Shiflett learned what she called “the basics of underwater archaeology” at the LAMP field school, during which she dove at two sites and had class- room instruction. The main site, also the focus of her six-week internship in 2012, is where a ship carrying Loyalists fleeing Charleston, S.C., sank in 1782. The site was discovered by LAMP archaeologists in 2009, and excavation has been conducted every summer since 2010.

“Most underwater archaeological field sites don’t recover artifacts, but this one does,” said Shiflett, who, although she didn’t find it, brought to the surface one of three muskets that were found during her internship, which was supervised by Bren- dan Burke ’03, an archaeologist who is LAMP’s logistics coordinator and the son of former Board of Visitors member Helen Warriner-Burke ’56.

“I enjoy being part of the discovery of history— I was a history minor — so touching that 200-year- old musket was exciting. It made me want to get up in the morning.”