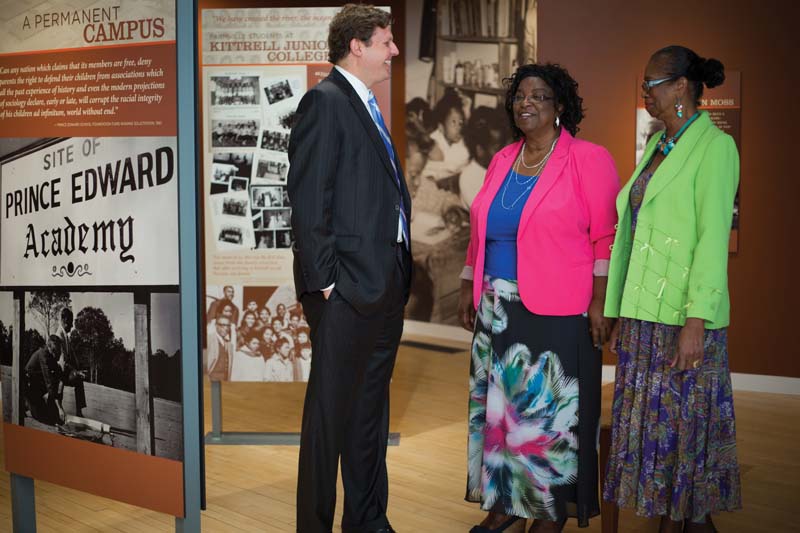 President W. Taylor Reveley IV with Joy Cabarrus Speakes (right), a member of the Moton Museum
Board of Trustees, and Dorothy Holcomb, chair of the Moton Council, the museum’s local advisory,
outreach and volunteer management arm. Holcomb was a student when the Prince Edward County
schools were closed from 1959-64. Speakes was one of the student strikers at Moton High School
in 1951 as well as a plaintiff in the landmark case Brown v. County School Board.

Longwood and the Robert Russa Moton Museum, the National Historic Landmark where a 1951 student strike helped launch the modern American civil rights movement, will pursue an affiliation that will preserve and strengthen the museum as well as provide a wealth of opportunities for Longwood students and faculty.

The governing boards of both institutions have endorsed exploring a formal working relationship through which the Moton Museum, which has operated as a stand-alone nonprofit, would become affiliated with Longwood while maintaining its 501(c)3 philanthropic entity status. In a manner similar to other university-museum partnerships around the country, Longwood would provide largely administrative and back-office support services for the museum, engage in academic and research collaboration, and work together with Moton to advance the museum’s mission of “civil rights in education” in conjunction with Longwood’s own mission of developing citizen leaders.

“The Moton Museum is truly sacred ground, and it is key in Longwood’s mission of service to the community and commonwealth to help ensure Moton and its mission are secure in perpetuity,” said Longwood President W. Taylor Reveley IV.

“For Longwood, this affiliation is also an extraordinary opportunity to help us become a center nationally for civil rights teaching and scholarship, and to offer remarkable learning opportunities for our students, many of whom already encounter Moton during their time on campus and are deeply influenced by the experience.”

As plans for the affiliation progress, the 2014-15 academic year will serve as a transition period, with Dr. Larissa Smith Fergeson, Longwood professor of history, serving as liaison between the university and the museum. Justin Reid will stay on as Moton’s associate director for museum operations, with normal operations and staff continuing.

“I don’t know a better way to teach our students about what it means to be a citizen leader than through this history and in partnership with the individuals who lived through those significant times,” said Fergeson. “There are tremendous opportunities for student research, co-curricular programming and student internships at the museum. An affiliation with the Moton Museum will also enhance Longwood’s outreach and economic development efforts in the region.”

We can leverage some of our experience with the Longwood Center for the Visual Arts, which already does stellar educational programming, to help Moton expand its programs for schoolchildren and other visitors,” she said.

“The Moton Museum is truly sacred ground, and it is key in Longwood’s mission of service.”

As an institution of higher education that still proudly sends many graduates into careers as educators, Longwood can also help to infuse this history into textbooks and into classrooms throughout the commonwealth and across the nation,” Fergeson added.

Dorothy Holcomb, chair of the Moton Museum Council, agreed an affiliation with Longwood would help spread the word about the museum and the history that it stewards.

“An affiliation with Longwood would help us ensure that the Moton story becomes as well-known nationally as it deserves to be,” said Holcomb. “We want to make sure this story is told, and I’m confident this is the best way for us to do so.”

The former Moton High School became the Moton Museum in 1996 and was soon thereafter designated a National Historic Landmark. In 2013, with assistance from Fergeson as lead historical consultant, the museum opened its new permanent exhibit. This year, Moton is on track to meet a goal of more than 13,000 visitors, and more than 1,300 Longwood students visited during the most recent academic year.