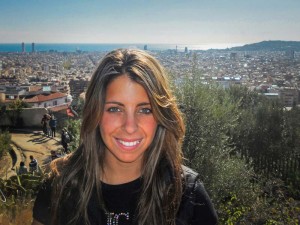 Longwood graduates know their degrees will take them far, but Laura Simon Espinalt ’10 had come a long way before she first took  a seat in a Longwood classroom—and she  hasn’t stopped moving since.

Her goal is to be Catalonia’s representative to the U.S., and with a master’s degree in international relations from the world-renowned London School of Economics and experience at the United Nations Institute for Training and Research (UNITAR) in Geneva, Switzerland, she seems well-poised to be successful.

She describes her studies in London as “intense”—her dissertation was titled “Gendering the Militarization of the War: American Intervention in Iraq”—and she says she did a little bit of everything” for UNITAR’s
peacekeeping training program, including facilitating online training courses and raising money.

The year she spent after that in New York City as an economic and policy research  analyst for Catalonia’s delegation to the U.S. inspired her current ambition.

Since October 2013, she has been a collaborator and project developer for Nova — Center for Social Innovation, a nonprofit in Barcelona that works for economic and social change by promoting civic participation and intercultural dialogue. She works on anti-corruption and transparency projects and helps Nova collaborate with other organizations.