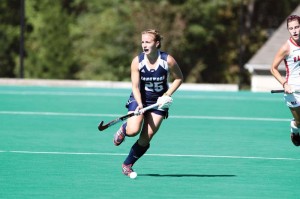 Longwood’s field hockey team is competing as a member of the Mid-American Conference (MAC) as of this fall.

“The Mid-American Conference is a great fit for our field hockey program,” said Longwood Director of Athletics Troy Austin. “The league has a long, proud history in all sports and will provide an excellent environment for the field hockey team. I look forward our squad competing this upcoming season.”

The Lancers, who had played in the Northern Pacific Field Hockey Conference (NorPac) since 2005, are eligible for postseason play and league awards this season. Longwood currently owns a 5-4 combined all-time record against its new conference opponents, having played every school except Missouri State at least once.

“We are extremely excited to become part of the Mid-American Conference, a prestigious league with a lot of history,” added Head Coach Iain Byers, who has guided the program to a 26-12 NorPac record during his tenure (59-70 overall).

Longwood is scheduled to play each MAC member this fall prior to taking part in its first championship with the new league. Miami has won the conference title for the last two consecutive years.

Founded in 1946, the Mid-American Conference is an NCAA Division I, 12-member conference that sponsors 23 championships. Not all of the members compete in field hockey.