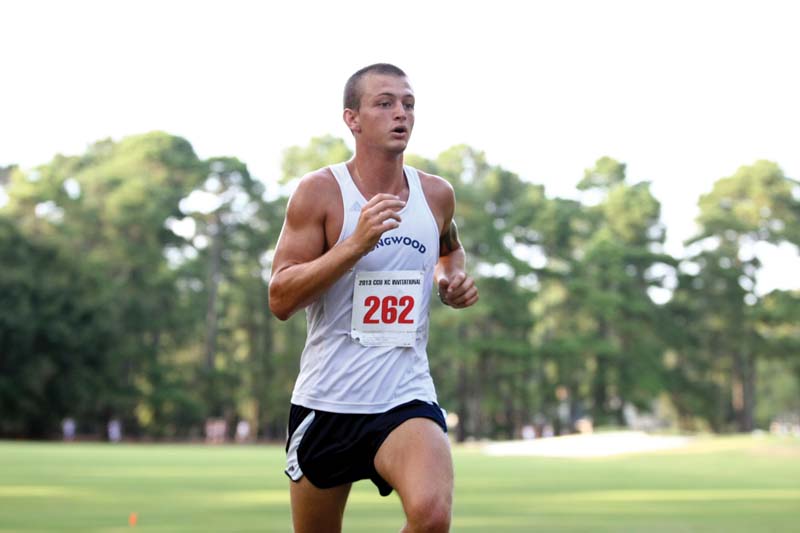 Russell Reed ’16 was captain of the men’s squad in 2013-14 and helped with planning
the Sept. 19 Longwood Invitational.

Membership in the Big South Conference has already paid huge dividends for Longwood’s athletic teams, and this month there’s another entry in the plus column.

For the first time in seven years, Longwood’s cross country athletes have the satisfaction and pride of competing on home turf. The Longwood Invitational at the Longwood Golf Course is set for Sept. 19, 2014.

Catherine Hanson, men’s and women’s cross country head coach, organized the last home meet at Longwood in 2007 during her first year as coach. She’s spent the years since then working to schedule another. Her efforts to forge reciprocal agreements with other coaches (“you come to our meet, and we’ll come to yours”) plus Longwood’s membership in the Big South Conference worked together to make this season’s Longwood Invitational a reality.

“Most other programs have home events where family, other student-athletes and professors can come out and see the results of the athletes’ hard work,” said Hanson. “We’re excited that the Longwood community will now have the opportunity to gain a good understanding of what it takes to compete in this sport.”

Hanson also gave some of the credit to Elisabeth Drake ’16 of Onemo and Russell Reed ’16 of Gloucester, who provided outstanding leadership in 2013-14 as captains of their respective squads and with the September invitational.

“They played a very strong role in bringing the meet back this year,” she said.

Longwood’s 20 or so cross country athletes don’t make 3-pointers or hit home runs, but trying to shave 15 seconds off a 5K time takes determination, heart and a lot of training. Women’s team members in training usually run about 50 miles a week, and men average about 85 miles. Events involve running distances ranging from 5 kilometers to 10 kilometers, often up and down hills and over difficult terrain.

“Having the opportunity to compete at home is really motivating our team to do their best,” said Hanson. Her goals for this season include continuing to move the women’s team up in Big South Conference standings and ensuring that the men hold onto—or improve —their seventh place ranking from 2013.