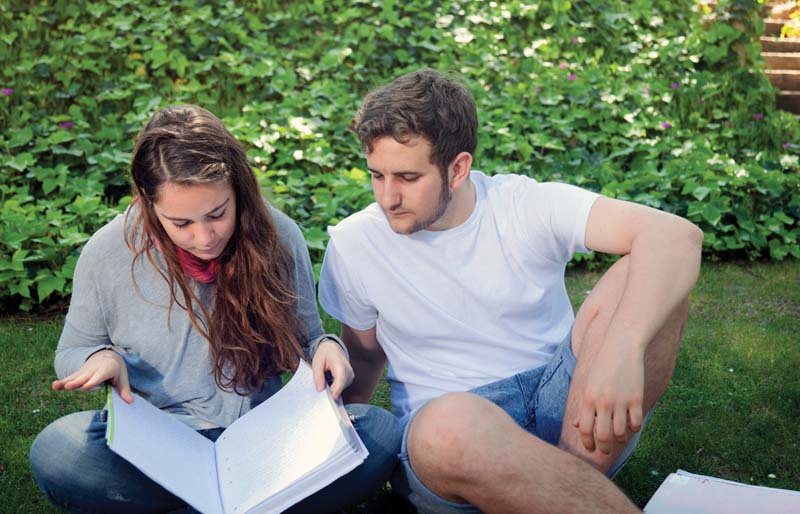 Homework seems to work better when the focus is shifted away from grades and toward
re-engaging students with the work.

If you want to make homework more effective, hold off on grading it, says a Longwood professor.

Frustrated that students were ignoring his written comments when he returned homework assignments, Dr. Don Blaheta, assistant professor of computer science, decided to try withholding a grade until students revise their work. Homework in his classes is returned initially with comments but no grade; after revision, with a grade but no additional comments.

“Not giving them a grade at first is the magic sauce,” said Blaheta, who recently presented a paper on his approach at a national conference for computer science educators. The key, he said, is to shift the focus away from grades—he also simplified his grading scale—to an effort by students to “re-engage” with the work, which research says helps them better learn and retain the subject matter. In addition, he strongly encourages students to collaborate in small groups, which also aids the learning process.

“Students like this model and think it’s effective,” said Blaheta. “I see no reason why it can’t be used in other disciplines.”

Other computer science professors also are intrigued by the approach. Blaheta’s paper, delivered at a conference affiliated with the Association for Computing Machinery (ACM), generated more feedback than any of his previous professional presentations—and he has presented at conferences in France, Spain and throughout the United States.

The elements of his homework model are what he calls comments without grades, a revision cycle, grades without comments and a limited grading scale.

“Packing these four elements together is new, especially giving students comments but no grade, which forces them to read the comments,” said Blaheta. “It was demoralizing knowing that I would give them detailed comments on homework, but they wouldn’t read them. I thought that if I changed a few things at the same time, I could change the experience for students.”

This approach, which he doesn’t use for all homework assignments, doesn’t increase work for students or for him. He had considered other fixes but said they would have doubled his workload.

Blaheta has used this in several classes since piloting it in his 300-level artificial intelligence course in spring 2013. He had encountered students ignoring written feedback on homework even before joining the Longwood faculty in 2011.

“This is a standard gripe among educators,” said Blaheta, who previously taught for a combined eight years at two colleges in his native Illinois.