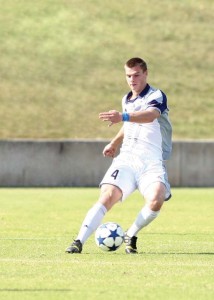 2013 was an exciting year for the Longwood men’s soccer program. After a tough inaugural campaign in the Big South, the Lancers were picked to finish eighth in a preseason poll. When November rolled around, Head Coach Jon Atkinson and his squad were hosting a quarterfinal as the No. 3 seed.

“Last year was a great year for us,” Atkinson said. We were a young squad and performed very well. That bodes well for the future.”

Longwood went on to defeat Campbell in penalty kicks, advancing to the semifinals of the Big South Championships with just six upperclassmen on the roster. Turn the calendar, and the 2014 campaign looks bright. Eight of the 11 starters from a year ago return to Farmville, including 2014 captains Anthony Ugorji ’15, of Washington, D.C., and Mike Durr ’16, of Brandon, Miss.

“Those two guys have really established themselves in terms of commitment to the program” says Atkinson. “Plus what they bring on the field—Mike corralling the backline and Anthony threatening up top—is huge to this squad.”

Joining the veterans will be an incredibly talented incoming class. Three members of the 2014 class have represented their national team. At the very least, the incoming crop of players should lead to increased competition for minutes.

The competition should be beneficial to Longwood as a tough schedule lies before the Lancers: nonconference clashes with Navy, a top 25 team in 2013, along with Pittsburgh and Virginia Tech balance out an always competitive Big South slate.

“For us it’s all about making the Big South tournament,” Atkinson said. “It’d be nice to have some momentum, but once you’re there it’s game by game, one and done, World Cup time.”