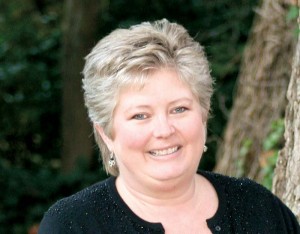 Anjanette Turner plans to graduate in May 2015.

A Longwood program offered in Martinsville is making dreams of a college degree come true for students who otherwise might not have been able to achieve their goals.

Take Anjanette Turner, for example. After graduating in 1987 from Patrick Henry Community College (PHCC), she attended a four-year university for a semester, then moved back home to Martinsville and commuted four days a week to another school 40 minutes away before dropping out after one semester.
“I couldn’t afford the tuition and the cost of the drive,” said Turner. Instead, she switched to full-time work at her grocery store job, got married, had two sons and dreamed of being a preschool teacher.

In 2012, she found a way to make her dream come true—Longwood’s teacher-preparation program in Martinsville for nontraditional students. This fall and spring, she’ll do her student teaching, and she hopes to graduate in May 2015.

“This program has allowed me to continue working full time,” said Turner, who recently completed her ninth year as a preschool paraprofessional with the Henry County schools.

Turner is one of 27 students—the most ever—currently enrolled in Longwood’s bachelor’s degree program in liberal studies/elementary education at the New College Institute (NCI), a state-funded educational entity in Martinsville. Another 27 students have graduated from the program since it began in 2007. To be accepted in the program, which offers pre-K-6 endorsement and licensure, students must have an associate’s degree from a Virginia community college.

“We’re turning out top-notch teachers,”  said Dr. Pam Randall, a former principal in the Henry County schools, who became program director in August 2011. “In the last two years, all of our graduates who
wanted to work as teachers were able to find work.”

A recent agreement with PHCC, which is nearby and the primary source of students for the Martinsville program, assures a smooth transition to the bachelor’s degree program.

Longwood was the first college to partner with NCI, established in 2006 to improve the historically low college-going rate in southern Virginia. The closest public four-year colleges are more than two hours away for most Martinsville-area residents, and in response to thousands of manufacturing jobs lost in the 1990s, civic leaders identified the need for improved access to higher education. W. Taylor Reveley IV, now Longwood’s president, was involved in NCI’s founding.