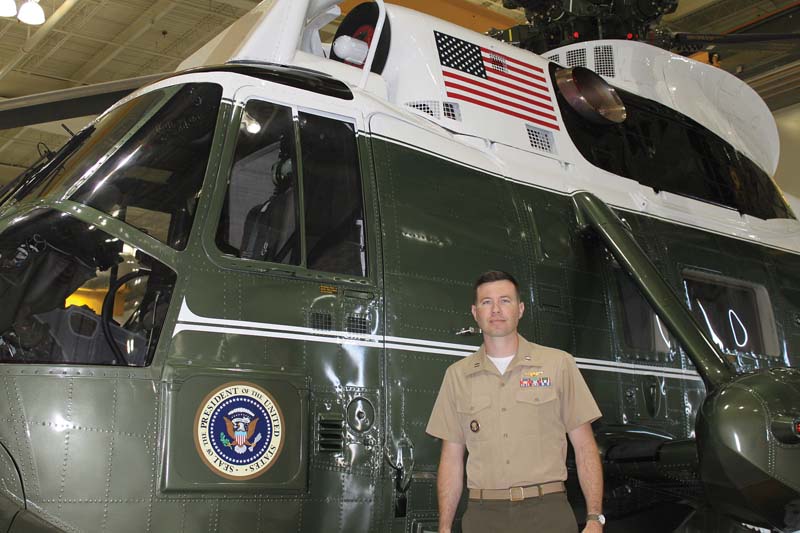 Capt. Patrick Richard ’03 is a pilot in Marine Helicopter Squadron One, which provides transportation for President Barack Obama.

Capt. Patrick Richardson ’03 has piloted Marine helicopters for about a decade, with his work taking him all over the world. But if you ask about his most memorable flight, you’ll learn it was close to home.

“It has to be the first time I landed on the South Lawn,” he said. “I’ve done some crazy stuff in my flying days, being deployed overseas, but that was definitely a pinch-me type moment. When you land there and all the cameras are going off and the president comes out and gets on your helicopter, … you just take a deep breath and you do it.”

Richardson is in his third year with Marine Helicopter Squadron One (known as HMX1). Stationed at Quantico, where he lives with his wife, Jamie Rudenski Richardson ’04, and their two sons, Richardson works with a team of 70 pilots who shuttle President Barack Obama from site to site—locally, as well as around the world.

That means when President Obama headed to Europe in June, Richardson and his team packed their VH-60N White Hawk onto an Air Force transport plane and flew across the Atlantic. That trip was pre-scheduled, but his assignments often involve little notice.

“[The president’s] schedule is pretty fluid, so things pop up and you have to make changes—natural disasters, whatever; the shootings in Connecticut,” he said, referring to the 2012 rampage in Newtown. “I was sitting on my couch on a Friday, and that happened. The next morning I was heading to Connecticut.”

All that travel might seem like a lot for a family man, but it’s nothing compared with Richardson’s previous overseas deployments. He left for Iraq when his older son, Alex, was 8 months, and then he went to Afghanistan. “I missed about half of his first four years,” he said.

The travel involved in his current work is more manageable—and even appealing. “You name the city in the U.S., I’ve been,” he said.

Richardson calls himself lucky for scoring a spot on HMX1, but there’s more to it than that. About 75 pilots apply each year, and a board reviews their experiences, selecting 10 or so for the post. “They’re obviously not going to take just anybody,” he said.

The Virginia native had long dreamed of becoming a pilot, but joining the Marines wasn’t in his original post-college plan.

He played baseball for Longwood—and still corresponds with former Coach Buddy Bolding—and then landed a position with the Frontier Baseball League. The minors didn’t prove the springboard Richardson had hoped, so he signed up with the Marines in 2005. The gig got him into a cockpit, flying attack helicopters for about five years.

“Over the course of about four or five years flying those helicopters, you prove yourself as a good pilot, as a good tactician,” said Maj. Jeffrey Cahill, Richardson’s current supervisor. Those are the kind of guys and girls that we’re looking for to come to HMX1.”

The mission lasts four years, and Richardson’s stint is now nearing its end. His next post could take the family to North Carolina, California or even Hawaii. He doesn’t expect to return to
a combat zone, but nothing is guaranteed.

You never know what the future holds,” he said. After all, meeting the president may have seemed unlikely at one time. Now he’s flown President Obama about a dozen times and had the chance to talk with him as well.

“Every time he gets on, he comes up and says, ‘Hey guys, how’s it going, thanks for the ride’ and all that,” said Richardson. He’s very grateful.”