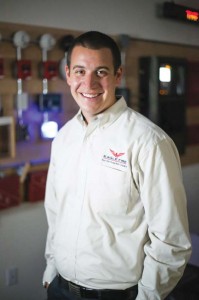 When Cory Nichols ’08, MBA ’10, touts the benefits of networking, he is speaking from personal experience.

Nichols, mid-Atlantic area manager for Eagle Fire Inc., landed a job with the fire protection company through his personal acquaintance with president and CEO Harry Hoffon. Then a graduate assistant at Longwood,

Nichols met the company executive in 2010 when he gave Hoffon a campus tour. Two years later, when Nichols was working for Boeing, Hoffon called him and asked if he knew anyone who could fill a job. At the suggestion of his wife, Colleen Whitney Nichols 10, Nichols said he was interested. A month later, he was on the Eagle Fire payroll.

“Networking is instrumental,” said Nichols, a member of the Alumni Advisory Board of the College of Business and Economics. There’s a time and place to look for a job with Monster.com, but I tell people, ‘Just as you wouldn’t start looking for your spouse on Match.com, you shouldn’t look on Monster.com until you’ve tried other avenues.’

“But people want instant gratification, which networking doesn’t provide. However, Harry thought of me when he needed something, even though we hadn’t talked in two years, which is the value of networking.”

Nichols, who works at Eagle Fire’s corporate office in Richmond, started in March 2012 as the company’s inspections manager. He was promoted in January 2013 to his current position, in which he oversees about 55 employees. The Mid-Atlantic area encompasses all of Virginia and Maryland. Founded in 1987, Eagle Fire has about 125 employees in eight offices in seven states stretching from Maryland to Alabama. Customers of more than 20 years include Hampden-Sydney College, Virginia Tech and Fort Lee.

“We still have 19 of our original 25 customers, which is a testament to our service,” said Nichols.

After getting his MBA, Nichols worked for Boeing in Northern Virginia for nearly two years, first as a financial support specialist and later as a financial analyst.

Nichols and his wife, regional manager for Reach-EAP, an employee assistance program, were featured in a segment of HGTV’s Househunters” program that aired in June 2013. The segment focused on their December 2012 move from an apartment in downtown Richmond to a new house in a Chesterfield County subdivision.

“They filmed for 40 hours—five eight-hour days—to get the 20-some minutes of footage that appeared in the show,” said Nichols. (View the episode: http://www.hgtv.com/shows/house-hunters/episodes/newlyweds-buy-a-big-home-in-the-richmond-burbs)