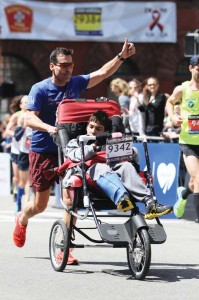 Mike Porter ’90 and his son, Jeffrey, who has cerebral palsy, competed in April 2014 in their first Boston Marathon. The Porters have run about 50 races together over the past three years, including the Richmond Marathon in 2012 and last year’s Marine Corps Marathon in Washington, D.C. “My son and I have bonded through this,” said Porter, who lives in Fredericksburg and is a divisional sales manager for Larson Manufacturing. Porter and his son, who races in an adult jogging stroller that has been modified, finished the 118th Boston Marathon in 3 hours and 27 minutes.

They plan to keep running races together and will participate in the Marine Corps Marathon this October. “He absolutely loves this,” said Porter of his son, who graduated from Riverbend High School in June.