A full slate of Longwood alumni was elected to the executive committee of Longwood’s Board of Visitors in June and one of four new Board members appointed by the governor is an alum, as well. 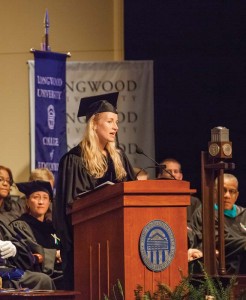 Recently elected Board of Visitors Rector Colleen McCrink Margiloff ’97, speaking at Convocation in 2012

Colleen McCrink Margiloff ’97, a past president of the Longwood Alumni Association, was elected rector of the Board. She succeeds Marianne Moffat Radcliff ’92, who completed her maximum two-year term as rector on July 1, but will continue to serve as a member of the Board.

Margiloff, of Rye, N.Y., was first appointed to the Board of Visitors in 2013. She and her husband, Will, established the Margiloff Scholarship Fund at Longwood and co-chaired the successful New Donor Challenge. She served on the university’s Alumni Association Board from 2007-13.

Wertz, of Leesburg, is commissioner of revenue for Loudoun County. Walker, of Charlotte Court House, has worked for more than 20 years as a librarian at Randolph-Henry High School. Mobley, of McLean, is a program manager for Thomson Reuters.

Also in June, Gov. Terry McAuliffe appointed four first-time members to the Board of Visitors.

Eileen Mathes Anderson ’83, of Glen Allen, is the CFO of InfoPro Inc., an information technology company based in McLean, and has served on the Longwood University Foundation Board. Before joining InfoPro, Anderson was a vice president with VICOR Business Services.

Katherine Elam Busser, of Goochland, is the CEO of Virginia Children’s Hospital Alliance, a group seeking to establish a top-tier children’s hospital in the Richmond area. Previously she was executive vice president and Central Virginia market president of Capital One.

Lucia Anna “Pia” Trigiani, of Alexandria, is an attorney at MercerTrigiani, a real estate law firm, and has served as president of the Virginia Bar Association. 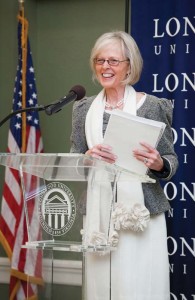 Additionally, on June 20, the governor appointed David H. Hallock Jr., of Richmond, to fill the Board seat that had been held by Jane S. Maddux until her death June 7. Hallock is a senior adviser to U.S. Sen. Mark Warner.

Maddux, of Charlottesville, enjoyed a long and varied career in business and public service. She chaired Longwood’s 2012-13 presidential search committee, and was also the only nondoctor and nonlawyer appointed to the Virginia Board of Medicine.

“Jane had a remarkable love and affection for Longwood,” said President W. Taylor Reveley IV, “and the Longwood community adored her in return.”