As the new director of the Longwood Center for the Visual Arts, Rachel Talent Ivers is impressed with where the museum is today—and excited about the how she can guide it in the future. 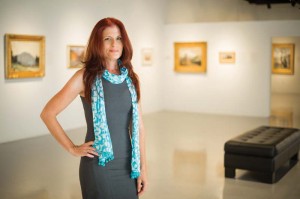 Ivers, who began her duties on June 25, was drawn to the LCVA by several factors: It is involved in the community; all of its activities are free; it coordinates an extensive art-on-campus program; and each of its existing collecting areas is substantial.

“I really like the impact it has on people’s lives,” she said. “There’s an extraordinary staff in place. They have creative ideas and enthusiasm.”

Moving forward, Ivers is thinking about creating an exhibitions focus group and a student advisory group as well as working with the staff to continue to develop more interactive use of the LCVA’s window space on Main Street.

“An exhibitions focus group is valuable in engaging people so they’re not just window shopping but become more fully involved in LCVA,” said Ivers. “I want the group’s members to evaluate proposals and share their ideas of what they want to see. It’s helpful to hear other voices.”

Similarly, members of the student advisory board that Ivers envisions would share their thoughts on programming and marketing that would appeal to students.

“I want to draw students in—in addition to their volunteer service, which is significant—especially since we’re a university museum,” she said.

Ivers is also looking forward to working with the LCVA staff on “activating window space to make it more functional and interactive. We want to engage passersby and provide greater street presence.”

Ivers came to Longwood from Nova Southeastern University’s Museum of Art in Fort Lauderdale, Fla., where she had worked since 2006 as director of exhibitions and curatorial services. She was exhibitions coordinator and registrar at the Bass Museum of Art in Miami Beach from 1996-2006. A native of the Sarasota, Fla., area, she has a bachelor’s degree in art history from the University of Central Florida and a master’s in American art history from George Washington University.

The LCVA in 2010 earned accreditation from the American Association of Museums, a distinction held by only 4.5 percent of museums across the country.

The LCVA’s permanent collection contains more than 3,750 objects of folk art, 19th century decorative arts, American art, art by Virginians, African art and Chinese art. Much of the collection is displayed throughout the campus.

“I’m really happy to be here,” said Ivers, who is married and has a 7-year-old daughter.