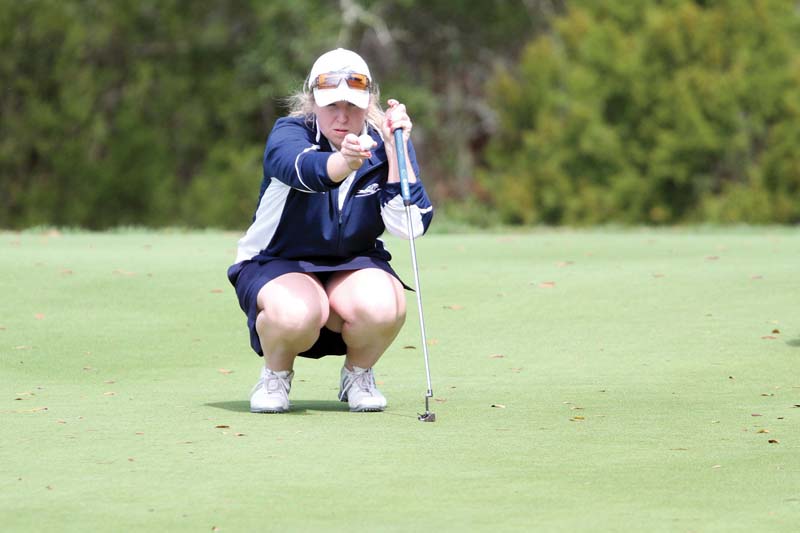 Amanda Steinhagen ’14 is planning to shoot her way onto the LPGA tour. Red Rocket Photos

Amanda Steinhagen ’14 is already looking to the future.

A senior and the latest in a line of extremely talented women’s golfers to wear the Longwood uniform, Steinhagen is determined to make the LPGA tour—a lofty goal women’s golf coach Ali Wright thinks is attainable. “She will definitely be successful as a professional,” said Wright. “Her game is so consistent—she hits it far and has a great short game, but most importantly, her head is so strong. She’s a confident golfer, and anywhere we play she finishes near the top.”

A business administration major from Herndon, Steinhagen plans to turn pro shortly after her May graduation. From there, she’ll enter a few state opens—including the Tennessee Women’s Open, at which she was the top amateur last year and second overall—before entering Qualifying School in August. The stakes are high in this grueling test of a golfer’s ability: Top finishers of the multiple-tournament playoff are rewarded with an LPGA tour card and entrance into each event on tour.

Steinhagen follows in the footsteps of several notable Lancer women golfers, including Tina Barrett ’88, who had a long and successful professional career, and Charlaine Coetzee Hirst ’95, who was recently inducted into the collegiate hall of fame (see story at left). But it wasn’t so much the history of the program that drew her to Longwood as the future. “I developed a really good relationship with Coach Wright,” said Steinhagen. “We were confident we’d work really well together—she was just someone I clicked with. I knew I’d have the support at Longwood to really improve my game.”

Her game is constantly in flux as she searches for ways to prepare for her professional debut later this year. When she arrived at Longwood, Steinhagen brought with her a stunning short game—the facet most golfers say shaves the most strokes off a scorecard—and good length off the tee. In her sophomore season, she was ranked among the top five women’s golfers in the country in terms of short game. After falling off last year, Steinhagen is focused on returning to the upper echelon of players. “I’ve had a lot of equipment changes and have reworked my swing a few times,” she said. “It’s all clicking now, though. I’ve worked on getting the short game back where it needs to be, and I’m striking the ball really well.”

To Wright, Steinhagen’s constant focus on improvement sets the tone for the rest of the team. “She is a program-changer,” said the nine-year Lancer coach. “She leads by example—the other golfers watch her and take their cue from her game. She’s helped elevate our program to the next level by setting high expectations for herself and the team.”