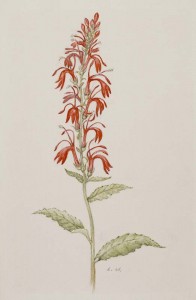 Cardinal Flower by Lucile Walton ’25, Collection of Mountain Lake Biological Station of the University of Virginia

Walton is one of several artists whose work will be included in the exhibition, which runs through Sept. 13, 2014. The Library of Virginia is located in Richmond.Walton illustrated, among other things, a column in Virginia Wildlife in the 1970s and 80s. The bulk of her work, though, was done at Mountain Lake Biological Station in Giles County, where she worked on science-related projects that included illustrating wildflowers and other botanical subjects.

Walton also spent 44 years teaching science and art at George Washington High School in Danville. In addition to Longwood, she studied at Harvard, Duke and the University of Virginia. Walton, who received Longwood’s Distinguished Alumni Service Award in 1977, died in 2000 at the age of 99.