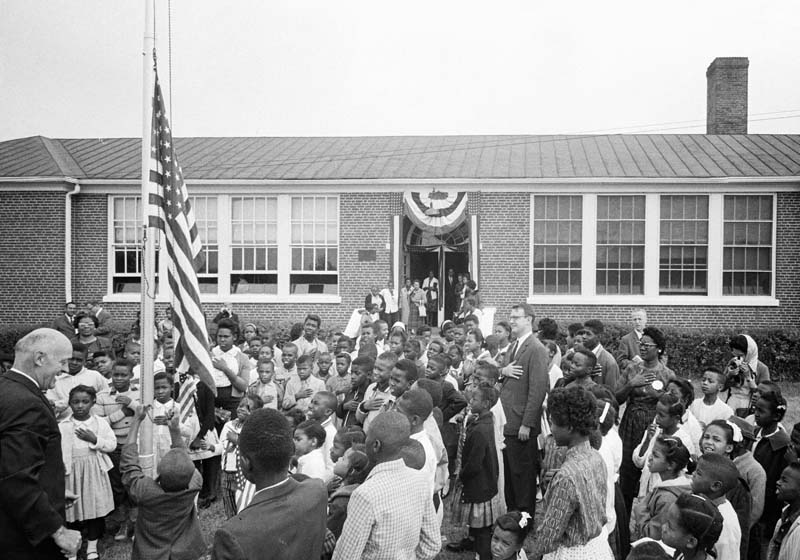 Administrators and students say the pledge of allegiance on the opening day of the Prince Edward Free Schools, September 16, 1963. Photo donated by Corbis-Bettmann to the Moton Museum. Courtesy of the Moton Museum.

The Beatles’ appearance on “The Ed Sullivan Show,” the War on Poverty, the Civil Rights Act, Freedom Summer, the Gulf of Tonkin Resolution, Barry Goldwater’s presidential run—2014 brims with anniversaries commemorating events of 50 years ago. While these anniversaries prompt us to pause and reflect, and perhaps indulge in a bit of nostalgia, they also open up opportunities to teach a younger generation about lesser-known chapters of our American story.

This semester Longwood faculty and students are exploring a chapter that happened here in Prince Edward County 50 years ago.

By 1964, the county public schools had been closed for almost five years in defiance of a federal court order to desegregate. In the wake of the closings, families pursued different paths. Some sent their children to the private academy. Others were barred from attending or could not afford the tuition. Many held fast to the principle that public education should be available to all; they sent their children out of the county to attend school or kept them at home. Citizens anxiously looked to the courts for relief, but the conflict dragged on for years.

The school closings attracted national attention and intervention. In September 1963, the Kennedy administration, working with Virginia educational leaders, established the Prince Edward Free Schools Association. The Free Schools were privately funded but open on a desegregated basis to all children. Free School teachers employed innovative teaching methods to prepare students for the return of public education.

On May 11, 1964, U.S. Attorney General Robert F. Kennedy came to Prince Edward to visit the Free Schools. The New York Times reported that Kennedy’s motorcade was forced to stop on High Street as “hundreds of beaming, shrieking young women” from Longwood surrounded the car. Two weeks later, the Supreme Court issued its ruling in Griffin v. County School Board of Prince Edward County and ordered the reopening of the public schools. Although conflicts over school funding continued for years afterward, the principle of public education for all had been won. The burden of fighting for that principle, however, fell hard on the shoulders of a generation of children.

As the anniversaries of these events approach, Longwood students and faculty are commemorating the stories of the school-closings generation through two projects, which will debut later this spring.

Heather Lettner-Rust, assistant professor of English, and Michael Mergen, assistant professor of art, have brought together their students in photography and in ENGL 400, the capstone General Education course, to create a publication and exhibition featuring the stories of 10 people who experienced the closings. In a second project, Kerri Cushman, associate professor of art, and visiting letterpress artist Jessica Peterson are working with students to create a fine art, handmade book and broadsides about the community’s memories of the Free Schools. Justin Reid, associate director of the Moton Museum, and I serve as historical consultants for both projects. These projects are supported by Longwood’s art and history departments, the Cook-Cole College of Arts and Sciences and the Cormier Honors College, as well as through grants from the American Democracy Project and Longwood’s Parents Council.

These projects would also not be possible without the Moton Museum, Virginia’s only civil rights national historic landmark, as a community partner. Last year, the museum opened a permanent, six-gallery exhibit chronicling Prince Edward’s civil rights history from 1951 to 1964 from the perspectives of all the county’s citizens. Through its public programs, the museum is an important space where Longwood students and faculty can come together to learn alongside and from local citizens; it is a place where bridges between Longwood and the Prince Edward community are being built.

These collaborative projects reveal to students the interdisciplinary nature of the liberal arts and sciences, but they are more than just classroom exercises. Listening and talking to local citizens teaches our students much about the importance of education in our democracy and about the resilience of the human spirit.

As one of the Moton storytellers said recently, “They called us the lost generation … but we survived!” It is through projects like these that Longwood truly fulfills its mission to develop citizen leaders who are prepared to make positive contributions to the common good of society.