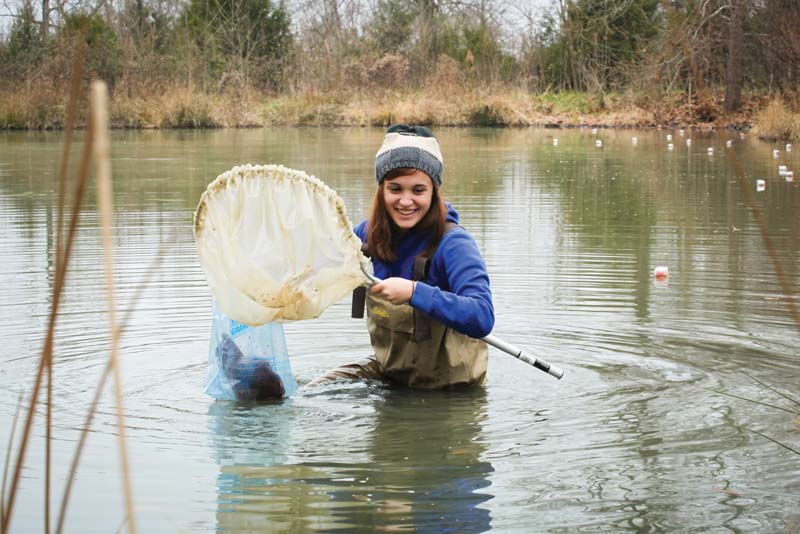 Dr. Ken Fortino’s research into the role lakes play in the carbon cycle is being continued by Longwood students including Leanna Tacik ’14, a biology major from Virginia Beach, who are looking at how farm ponds process organic material.

How to put the brakes on climate change by reducing carbon dioxide in the atmosphere has scientists around the world digging for solutions. A biologist at Longwood says one key piece of information may lie buried at the bottom of lakes and ponds.

The Environmental Protection Agency reports that greenhouse gases in the atmosphere—mainly carbon dioxide—will continue to increase exponentially, causing catastrophic problems and changing the way we live. Global models predict average temperatures will rise by 2 degrees by the turn of the next century.

But our goose isn’t cooked yet, says Dr. Kenneth Fortino, assistant professor of biology. While more testing needs to be done to understand the complexities of the problem, Fortino points to the role lakes and ponds play in the carbon cycle as one often-ignored piece of the puzzle.

When organic matter—leaves, sticks, etc.—falls into a lake, it sinks to the bottom. That matter, which is derived from the carbon dioxide in the air, starts to decompose, which releases CO2 into the atmosphere, completing the cycle. But often the organic matter is buried when it sinks to the bottom—which means the carbon remains trapped under the water and is prevented from returning to the atmosphere. Understanding how that happens—especially which lakes bury more carbon than others—will help us understand how the system evolves as the climate changes, said Fortino.

Fortino has studied which lakes bury their organic matter—keeping harmful levels of CO2 out of the atmosphere—and which cycle that CO2 back into the atmosphere. His article, “Relationships between lake transparency, thermocline depth and sediment oxygen demand in Arctic lakes,” has been published in the journal Inland Waters.

Fortino’s research correlated a lake’s transparency with its ability to bury organic matter—the more transparent the lake, the more harmful CO2 is buried. “Lakes are broken into two layers, and the thermocline is where those layers meet. What we found is that the lake’s transparency is correlated with the depth of the thermocline, which can predict with good accuracy how much organic matter will be buried in the sediment,” he said.

Our understanding of the carbon cycle is still evolving, making research like Fortino’s critical as governments discuss taking measures to stem the tide of climate change.

For example, scientists only recently have discovered that inland waters process a good deal of carbon themselves rather than just transporting it to the ocean for processing, as was previously thought.

And it’s not an insignificant amount of material. Carbon is measured in vast quantities: 1015 grams of carbon equals 1 PgC (one petagram of carbon). Humans add about 9 PgC to the atmosphere each year, and that number is growing. The amount of carbon that falls into inland waters is nearly 3 PgC—and only about a third of that makes its way to the ocean, said Fortino. “We are interested in what happens to the other two units of carbon—is it buried in the sediment or is it processed back into the atmosphere where it can contribute to the problem? Knowing which lakes and ponds process the most carbon, and how they do it, is a key part of the overall picture.”