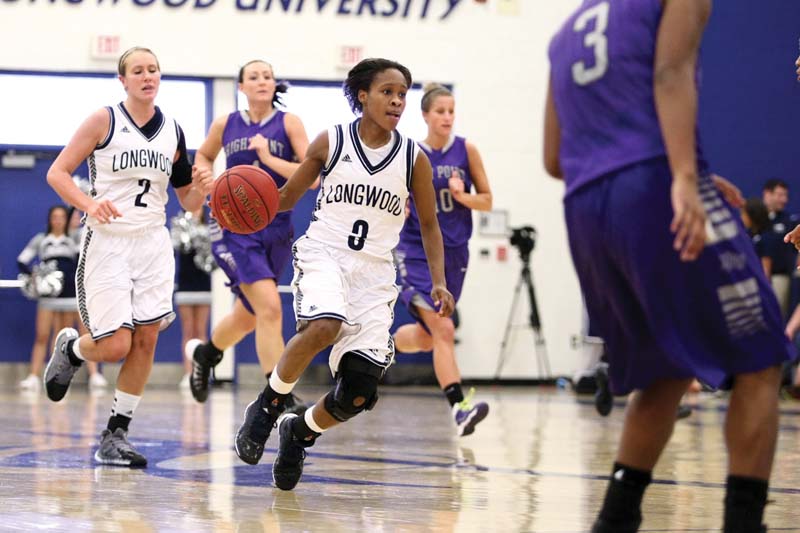 Daeisha Brown ’16 averages more than 15 points per game for the Lancers.

At first glance, Daeisha Brown and Raven Williams couldn’t be more different. One is quiet; one outgoing. One stands 5-foot-3 and is one of the league’s top point guards as a sophomore. The other is a 5-foot-8 versatile player who can play shooting guard and still post up.

But on the court, the two play more like sisters than strangers. “I always look for her on the court,” said Brown ’16. Sometimes, it seems to other teammates, they don’t even have to look for each other. Forward Heather Tobeck ’14 said the two seem to always know where the other is going to be on the court at all times. “That’s what happens when you play together your whole life,” she said.

The pair first played ball together as teenagers on several Richmond AAU teams. While they split to play at different high schools—Brown at Huguenot and Williams ’16 at Monacan—they found themselves back in the old groove as Lancer teammates.

“I honestly didn’t think we would go to the same college, but it is a great feeling,” said Brown, who liked the idea of attending college with someone she already knew. “When I came for my visit, I loved the campus,” said Williams. “I felt I could adapt quickly.”

Not content to just dish the ball to scoring teammates, Brown and Williams were breakout stars in some of the team’s biggest wins over the past two seasons. Brown, the player of the year in Richmond coming out of high school, poured in 26 points in the landmark win over Xavier in November and was a preseason all-conference selection. Williams was just hitting her stride—scoring in double digits in each of the first three games of the season—before an injury derailed her.

Both players were also underrecruited coming out of high school. Brown’s size worked against her, while coach Bill Reinson said other schools simply overlooked the talented Williams. “What we saw was a talented player who was being underrecruited. People missed out on her, and she is proving them wrong.”

Her leadership is soft-spoken, though, and sometimes the team needs some energy to pump them up. For that, they turn to Brown’s teammate. “I like to hype the team up,” said Williams with a smile.