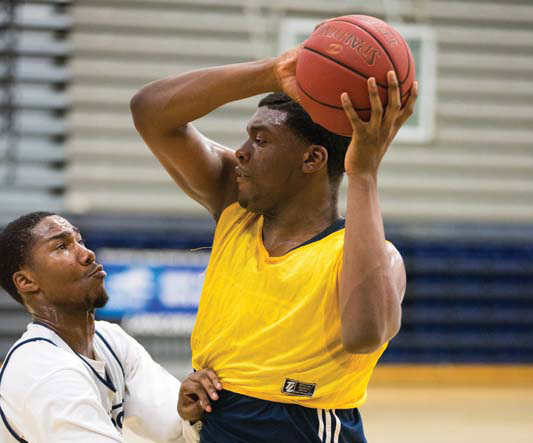 Look out for the Lancers next fall.

That’s the message from Coach Jayson Gee, who has put together an impressive recruiting class in his first year at the helm of the men’s basketball program. Built upon his vision of creating a winning culture with a defensive mindset, the Lancers will feature two Division I transfers and a host of high-school stars—many from Gee’s home state of Ohio.

‘Programs have success when the players absorb the culture, and that’s happening right now.’

The two Division I transfers—combo guard Quincy Taylor ’15, who started at the University of Alabama-Birmingham, and Tulane forward Lotanna Nwogbo’15—are already on campus and playing with the practice squad. 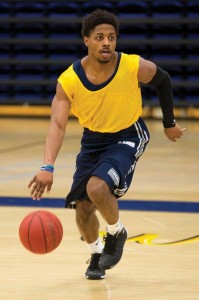 “Those two guys have bought into the program here and are getting a year of practice in the system,” said Gee. “They are becoming natural leaders of the program and will have the foundation to make a contribution on the court at the beginning of next season.”

Taylor, with one year of eligibility left in his college career, is a speedy combo guard who will play alongside sophomore star Lucas Woodhouse ’16, who has developed a knack for hitting go-ahead 3-pointers in the closing seconds during big games—specifically in wins against TCU and Liberty. Nwogbo, according to Gee, has a dominant ability to score around the basket and pull down big rebounds.

“These two guys are going to be two of the top 10 players in the Big South next year,” said Gee. “They have that caliber talent.” McDonald’s All-American nominee Ryan Badowski, a 6-foot-3 guard from Ohio, will join Taylor and Nwogbo on next year’s squad. Gee hopes Badowski, a sharpshooter with a 4.0 GPA, will be able to step in and make an impact immediately. “To have a commitment from an All-American nominee is to raisethe level of talent here,” said Gee. “Ryan has embraced the vision of the program and bought into what we are doing here. He’s a special player and will develop into a real star on the team.” 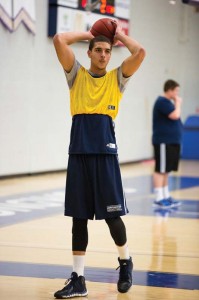 Joining Nwogbo in the frontcourt will be Charlie Lockwood ’17, a 6-foot-10 redshirt freshman from California, who has the talent to take his game to the next level. He’s also been a participant in practice during his redshirt year, learning the principles of the program.

“These three guys who are already playing with us know the five pillars the program is built on—faith, discipline, submission, love and hard work,” said Gee. “They have a big advantage in that they get to work on their skills outside the scrutiny of games. That’s let us witness before our very eyes the development of some very, very good basketball players.”

While many of the recruits come from Gee’s home state of Ohio, one in particular is very close: Gee’s son Bryan has committed to play for Longwood. Gee is a star point guard at Cornerstone Christian Academy in Willoughby, Ohio. “I’m known as a rebuilding coach,” said Gee. “I’ve been through this before. In the second year of the process, we take a big step forward because we are a year older, stronger, quicker and faster. Programs have success when the players absorb the culture, and that’s happening right now.”

Looking forward, Gee said that culture is what will set the stage for successful recruiting years ahead. The talent that will take the floor next fall certainly establishes the tone. This recruiting class represents my vision of Longwood teams to come,” said Gee.

Historically, Gee-coached teams make a giant leap forward in his second year. If that holds true, get ready for the Lancers.