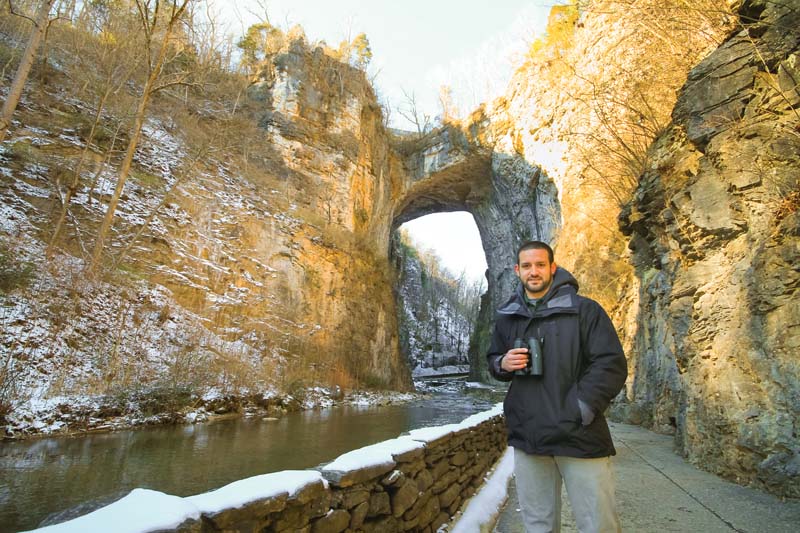 Wes Teets ’11 is an interpreter at the Virginia landmark Natural Bridge.

He had already spotted a black-billed cuckoo, a blue-winged warbler and a Say’s phoebe, but Wes Teets ’11 had a feeling his 150th bird-species sighting would be something special.

“I looked up, and there was a golden eagle,” he said of the rare sighting. “It was fantastic that I reached that milestone with such a wonderful bird.”

Teets, who studied biology at Longwood, is an interpreter at Natural Bridge—the iconic, must-see landmark for Virginia nature lovers—where he gives guided tours of the picturesque limestone bridge, caverns and nature preserve. It’s the perfect venue for him to share his true passion: observing wildlife.

“It’s most exciting when you see something rare happen on the tours,” he said. Once, during a routine tour, Teets noticed several raptors—the classification for birds of prey that includes hawks, eagles and falcons—flying overhead. “All of the sudden hundreds, if not thousands, of broad-winged hawks came over. The amateur birders on the tour were so impressed. They had never seen a migration like that.”

Visitors are drawn to the property for the famous 215-foot limestone arch carved out by Cedar Creek. What they find when they arrive is that Natural Bridge holds much more in the way of wildlife and plant species. On routine tours, an accomplished birder like Teets is able to point out some of the common species of birds in the Natural Bridge wild. The woods are home to a variety of woodpeckers, owls, swallows, distinctive-sounding cuckoos, long-legged herons and colorful, tiny kingfishers near Cedar Creek, one of Teets’ favorite birding spots.

But, for a birder like Teets, the most exciting discoveries happen in places off the beaten path. At Natural Bridge, one such place is the ridgeline Teets noticed on a forgotten topographical map of the property he stumbled across during a renovation. Teets thought the ridgeline looked like a perfect habitat for birds.

“It turned out to be a migration micro-corridor—a hot spot for birds on their journey south,” he said. “There are a lot of geographic features that birds use to migrate, and this is one of them.” Among regional birders, the ridgeline has become somewhat of a landmark itself—attracting people even from outside Virginia to observe rare species. It’s a classic example of the Patagonia Picnic Table Effect, in which one rare bird sighting attracts other birders to a location, where they sight other rare birds.

For Teets, birding is a passion that has been growing steadily since he was a child. I’ve been a birder for quite some time now,” he said. “I used to watch birds back in second or third grade, and started doing it seriously while I was at Longwood. The biology degree I earned at Longwood helped give me the base of information I need to give great tours at Natural Bridge, and also fostered my love for wildlife.”