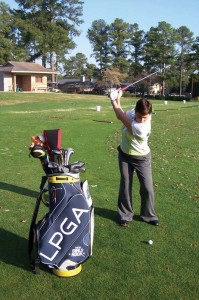 Charlaine Coetzee Hirst ’95, a four-time All-American who led the Longwood women’s golf team to national championships in 1993 and 1995, was inducted into the prestigious Women’s Golf Coaches Association Players Hall of Fame in December.

“It was an honor to be recognized for my achievements while at Longwood,” said Coetzee Hirst, who lives and works in Pinehurst, N.C., at the legendary Country Club of Whispering Pines as a pro. “I am so proud to be a Lancer.”

The Longwood record-holder for 54 holes, shot while winning the 1994 national title, capped off her college career when she was selected the first female student-athlete from a Virginia college to earn Today’s Top Eight award, the highest honor the NCAA presents. In addition to leading the Lancers to two team national championships, she won the individual title three times and was Virginia’s NCAA Woman of the Year in 1995. Coetzee Hirst was inducted into the Longwood Athletics Hall of Fame in 2007.

As a professional, Coetzee Hirst qualified for the 1998 U.S. Women’s Open championship, played on the Futures Tour for nine years and most recently played in the 2010 LPGA Championship.

A native of Durbanville, Cape Town, South Africa, Coetzee Hirst is married to Air Force Lt. Colonel Jay Hirst. They have one daughter.