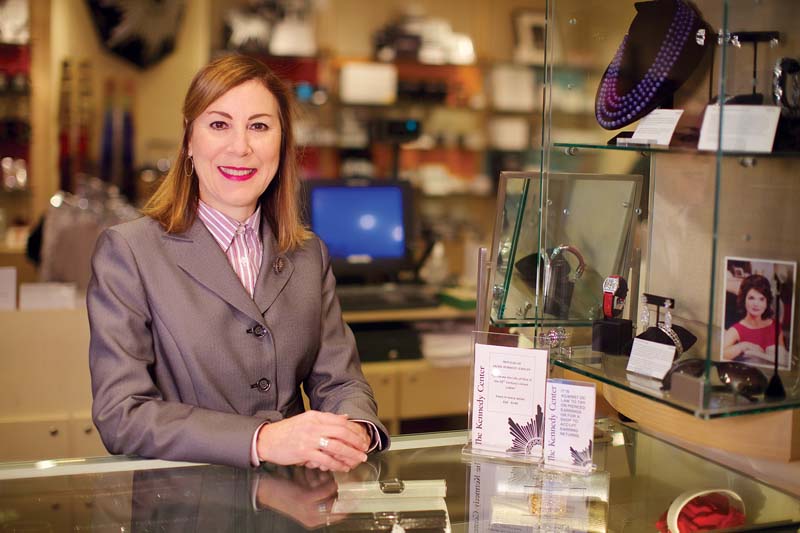 Barbara Lenhardt ’08 saw her future on a billboard.

While driving down a Richmond highway, she spotted a sign advertising the opportunity to earn an MBA in retail from Longwood’s College of Business and Economics. “It seemed too good to be true. It was exactly what I was looking for at the time: an opportunity to gain an edge in a field I was already in and really enjoyed.”

Now six years out from earning her MBA, she is the director of retail operations for the Kennedy Center for the Performing Arts in Washington, D.C. The position, which she began in 2012, not only gives her the opportunity to flex her business “muscles” but also has strengthened her appreciation of the performing arts.

Her responsibilities include running two large gift stores with 110 paid and volunteer employees, which includes overseeing visual design, buyers and the overall merchandise mix, and working with buyers on product development based on programming. She also handles contracts with touring productions like The Lion King and Wicked that set up concession stands selling their own products.

The Kennedy Center stores sell an impressive selection of performing arts-related books, music and DVDs. They also carry household accents, seasonal ornaments, games, and books and recordings related to President John F. Kennedy and his wife. There is even a Jackie Kennedy Collection of jewelry copied from the former First Lady’s private pieces.

But Lenhardt most likes the store’s original logo merchandise. Her current favorite items are a tote bag, umbrella and cosmetic clutch whose silver on black design is inspired by the dazzling Austrian chandelier found in the center’s opera house. “One of the highlights of the job is working on product development, taking it through from concept to delivery and then watching how it sells,” she said.

As head of retail, Lenhardt strives to maximize the stores’ business efficiency and taste level. At present, annual retail sales are $2 million- $3 million, depending on the Kennedy Center’s performance schedule—and the New Jersey native believes she can do even better. I’m hoping to increase sales by focusing on the website (kennedy-center.org) sales in the future.”

When she started at the Kennedy Center, Lenhardt mentioned to her boss that she’d never been to the ballet. He vowed to fix that, and did. “It’s an absolutely fabulous perk,” she said. “Whenever there’s a ballet at the Kennedy Center, I make sure to go.” To date, her favorite was an emotionally charged performance of Giselle danced by the Paris Opera Ballet.

Lenhardt describes the two years she spent getting her retail MBA as among the best of her life. “Because the program was very new and still developing, I was able to tailor it to suit me. Most of my classes were held in a satellite location in Richmond. For me, it was terrific to be working days as manager of retail operations at the Virginia Museum of Fine Arts (VMFA) and studying related matters by night. We were encouraged to bring real-life issues into the classroom. Without my MBA from Longwood, I wouldn’t be where I am now.”