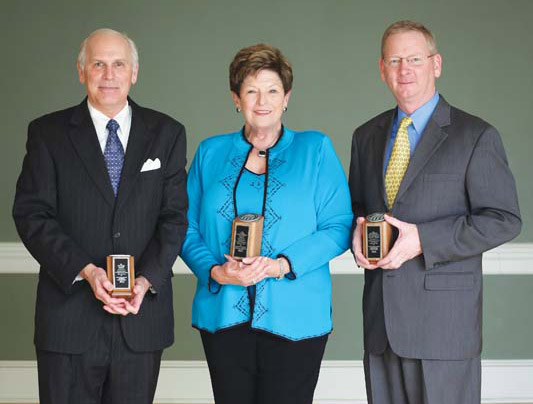 The Longwood Alumni Association Awards, established in 1970 and revamped in 2010, recognize alumni and others for their outstanding achievements and service. This year’s awards were presented at a Feb. 7 dinner on campus.

It’s not surprising that Richard Blanton ’75 chose a law career.

Blanton retired in 2011 after a career that included 16 years as a Circuit Court judge, five years as commonwealth’s attorney for Cumberland County, stints as county attorney for Cumberland and Prince Edward counties, and several years as a private practice attorney. He hasn’t left the courtroom, though. He serves both as a substitute judge and as a certified mediator who hears civil cases in a court-sponsored program to avoid going to trial. The Ruffner Award recognizes those who have achieved outstanding success and national distinction in their personal and professional lives.

He became close to English professors Quentin Vest (“a larger-than-life character”), his adviser; Bill Frank, then department chair; Martha Cook (“a wonderful teacher and a good friend”); and the late Massie Stinson. “The highlight of my Longwood time was hanging out in the faculty lounge and offices in Grainger,” said Blanton, who served on Longwood’s Board of Visitors from 1990-94. Except for my summer classes, I was the only male in all of my classes. There were only about a dozen male students, most of whom were veterans like myself.”

Blanton entered Longwood in 1974 after a four-year Air Force hitch. His first year at Longwood, he played on the first men’s basketball team, an unofficial squad that played its games in French gym and was coached by math professor E.T. Noone. “The first game we played, I took an elbow to the forehead, and E.T. Noone took me to the hospital, where I got eight stitches. I still have the scar to show for it.”

Today Blanton enjoys his work as a certified mediator, an informal process that seeks to resolve complex cases—often personal injury, medical malpractice and divorce cases— outside of court. “We have a very high settlement rate—70 percent,” he said. “I stay pretty busy. The other day, my wife said to me, I thought you were supposed to be retired.’”

Jay Poole ’82 was an Army officer for 25 years, during which he commanded a brigade near the Dimilitarized Zone separating North and South Korea, spent time in Iraq and traveled extensively as an aide-de-camp to a four-star general. But he didn’t really consider any of it work.

Though Poole, a logistician in the Quartermaster Corps, wasn’t the first Longwood graduate to make colonel, he was the first to command one of 10 prestigious Divisional Support Commands, an Army brigade-size unit. Poole was the 2nd Infantry Division Support Command’s last commander, at Camp Casey in South Korea, before the 2,700-troop unit was inactivated. In his last assignment, he was assistant commandant of the Quartermaster School.

After retiring from the Army, Poole was director of training for the Quartermaster School from 2007-09, and he has been dean of education and operations for the Army Logistics University, also at Fort Lee, since it opened in 2009. He lives in Chesterfield County with his wife, Michelle. He has three daughters (Candice, Julie and Heather) and two stepsons (Brian and Matthew).

Poole, who entered Longwood only two years after it became fully coeducational, was recruited to play baseball for Buddy Bolding, the legendary coach who retired last year after 35 years. He played on the first Bolding-coached team in 1979, as a right fielder, and still has one of the game balls from Bolding’s first win, 8-7 over Hampden-Sydney.

“The ball, which was signed by everyone on the team, is in my office,” he said. “I use it as a teaching prop to show young soldiers that big things can come from small beginnings, like with the Longwood baseball program.”

After Poole’s baseball career ended in the spring of his freshman year, Bolding introduced Poole to the ROTC professor of military science, and Poole joined the ROTC program, then only in its second year. “Always the coach, Buddy never lost touch with me throughout my career,” Poole said.

Poole hasn’t lost touch with two fraternity brothers who also were ROTC cadets who went on to high-ranking Army careers. Joe Bass ’83, his best friend and little brother in their fraternity, retired at brigadier general at the end of last year, and David Dodd ’84, another lifelong friend, made colonel before retiring in August 2011. When Poole was promoted to colonel in 2003, Bass, Dodd and Bolding attended the ceremony at the Pentagon.

At Longwood, Poole was president of his fraternity, Delta Sigma Phi, as well as president of Cox Hall council and vice president of the Interfraternity Council. He is a former member of the Alumni Board. His future plans? “I’d like to come back to Longwood some day and have Buddy’s old job,” he said with a laugh.

Tamara “Tammy” Whitt Chitwood ’68 learned the importance of helping others at a young age.

“I was raised in a household with parents who were involved in the community, and I just thought that’s what people do—they give back,” said Chitwood, who has been active for decades in community organizations, many of them related to health care.

“My mom was active in church volunteer work, and my dad started the local chapter of Special Olympics and chaired the Citizenship Service Committee of the local Kiwanis Club. The importance of volunteer work was something that we just accepted without giving it another thought.”

She learned her parents’ lessons well. Among her numerous volunteer affiliations, Chitwood is a past president of the Service League of Greenville, which raises money for that city’s main hospital, Vidant Medical Center, and staffs volunteer events. While on the board, she initiated the project that provided the first mobile coronary care unit in eastern North Carolina.

“What was great about the mobile coronary care unit, which provides vital care on the way to the hospital, was that one of the first persons to use it was the daughter of one of our founding members. She was having a heart attack, and it saved her life,” Chitwood said.

Chitwood once chaired and served for 15 years on the Pitt County Hospital [now Vidant Medical Center] Foundation. She is proud of her work with the organization’s Community Benefits and Health Care Initiative, which supports programs in the community. “Some of the programs help patients with diabetes, which is a major problem in this area, and many are focused on kids,” she said.

The medical nature of many of Chitwood’s volunteer activities can be attributed to her husband’s career. Dr. W. Randolph Chitwood Jr. is a cardiothoracic surgeon who is a professor of surgery at East Carolina University’s Brody School of Medicine, director of the East Carolina Heart Institute and internationally known for his mitral valve surgery involving a robot. The couple—high-school sweethearts in Wytheville—have lived in Greenville, N.C., since 1984. They have two children, Anne and Randolph.

Chitwood’s community activities include her past work with the Boys and Girls Club of Pitt County (“a wonderful organization that changes kids’ lives”) and her current work with Women for Women, whose mission is to give hope, change and a brighter future for the women and girls of Pitt County.” She will become president of Women for Women in June.

Her volunteer work extends to her alma mater, where she started as an English major and switched to business. She served on the Longwood Foundation Board from 2009-13 and was a member of the finance and budget committees.

Chitwood has no plans to slow down in her volunteer work. “If you can give money, that’s great, but it’s your time that is important,” she said. “It’s not about making you feel good; it’s about making a difference—in just one life. You don’t have to be involved in 10 organizations—just one that you care about.”